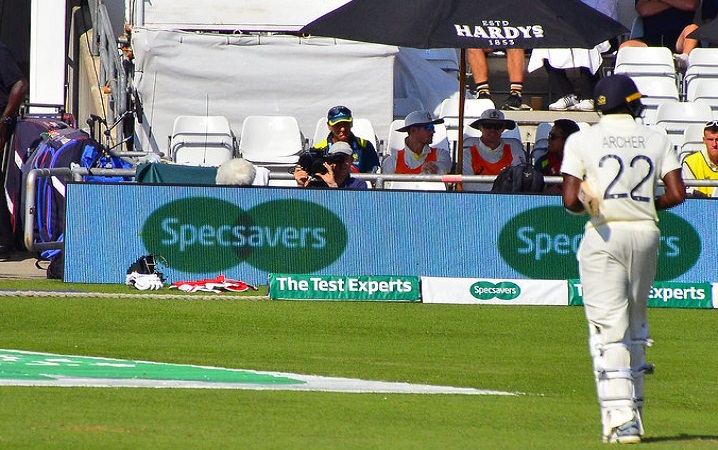 England finally made that inevident change in the final world cup 2019 squad that everyone else is expecting anyway. Selector Ed Smith showed confidence in Jofra Archer who’s just a couple of games old England lad. How can you ignore a guy for whom the law has been altered after all? He has been fast-tracked to England’s world cup side at the cost of English regular David Willey after all. So, what value does Jofra Archer brings into this bullish England side who’s on the winning spree even without him?

Jofra Archer is a consistent 90 MPH, no non-sense bowler. His Raw pace with accuracy and consistency can flutter any top-class batsmen. Pakistan’s 50+ averaging opener Fakhar Zaman found out that potent line and length in Archer’s first few outings. He was sucked into play the line and length, he would have let go of any other day. As admitted by the England selection committee, Archer can bowl in any phase of the game.

The raw pace is an ingredient that the English side is missing at the moment, except for Mark Wood. However, Wood’s inconsistency and injury-prone body mean, hard to rely on him throughout the tournament. Hence, Jofra Archer is an invaluable addition for them.

Three dimensional or 3D is a buzz word in modern-day world cricket. A player who is good at all three dimensions – bowl, bat and field well – is known as three-dimensional cricket. Jofra Archer can excel in all three dimensions as he showed in BBL and IPL. Apart from a good bowler, he can add some invaluable quick runs lower down the order and save at least 10 runs in an ODI with his athletic fielding.

Jofra is playing in all T20 leagues across the world, especially the big leagues like IPL, BBL, and CPL. Just a presence in these leagues can give a player handful of experience, let alone playing. But Jofra is at another level. playing all matches for the team he represents. The amount of experience he has gained of playing against the world’s best batsmen will prove invaluable for England’s world cup mission. Playing in these leagues, Archer has gained an experience of those match-turning crunch moments. That experience is vital for the tournament like world cup – just as Kohli insisted in his press conference today.

So, what Archer brings into England’s world cup squad is something unique that England – or any side for that matter – would desperately need to win a world cup on their home turf. Jofra is a vital cog of the England side that simply cannot be ignored.