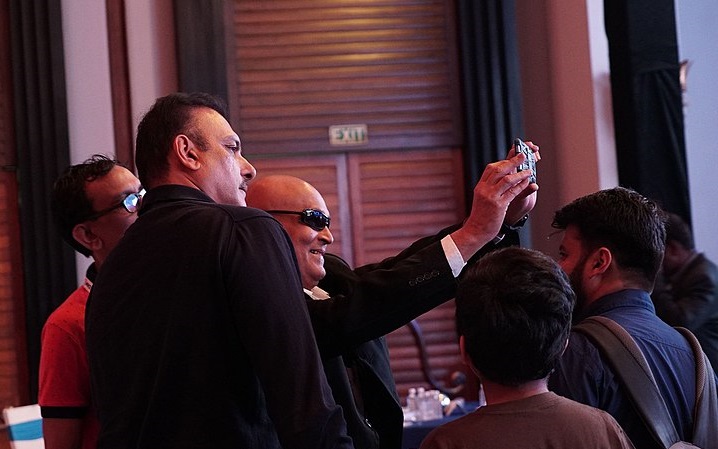 A lot of things have changed for Ravi Shastri since being a famous cricketer. During his cricket career in the early 1980s, many followed his meteoric rise from being a tall left-arm spinner who started 10th in the batting order to the one who moved up as an opener against the likes of Imran Khan and Ian Botham. He is best remembered as one of the men who hit six sixes in an over. For many Ravi Shastri is the one who drove an Audi in the Melbourne Cricket Ground after being crowned as Champion of Champions.

In 1992, he was chosen as captain of India’s first cricket team that toured South Africa – effectively ending the apartheid. But towards the end of that tour, he was hobbled by a knee injury. After consulting a top ortho expert, Ravi Shastri agreed to have surgery on the injured knee. Unfortunately, the damaged knee could no longer be repaired and the surgeon advised that he will not be able to compete in professional sports anymore.

From Manager to Team Director

In 2007, Shastri took up a role as cricket manager after India’s exit from the ODI World Cup in West Indies. He had criticized the work of Greg Chapell and his ploy worked. In 2014, after India suffered a 1-3 loss in England, he became Team Director, a role unheard of in Indian cricket. As a team director, he led India to the semi-final of the 2015 World Cup and won a Test series in Sri Lanka after being down 1-0. As a team director, his biggest legacy is helping India climb to the top of the test cricket rankings.

After his knee injury, his chin took a blow and Ravi Shasti’s career as a cricket player came to a premature end at the age of 30. With his active playing years over, Shastri decided to take on a new career as a commentator. He emerged as the familiar voice of Indian cricket. Many thought he was critical, but his criticisms were always positive, upbeat, and constructive.

Shastri built out a reputation for himself because of his flamboyant style of narrating the happenings of a live game. He was a commentator when Mahendra Singh Dhoni scored a historic six off Nuwan Kulasekara in 2011 ending India’s 28-year drought for a World Cup title. All the cricket fans remember that famous line “Mahendra Singh Dhoni finishes off in style”. As a commentator, he became the booming voice behind the microphone and became associated with the Indian cricket team in its most epic moments.

Shastri kept his eyes open and ear close to the ground in order to gain knowledge of the shifting ground reality of the sport. Seeing the sport from different angles, Shastri developed a broad perspective and the ability to step back and see the larger picture. He was the voice behind some of the most iconic moments in Indian cricket history from Yuvraj Singh’s six sixes at the 2007 World T20, S Sreesanth’s tournament-winning catch at the same tournament For Shastri, he considers being a media personality as a time for rebooting himself.

In addition, Shastri also gained serious administrative experience. He watched the cricket from the sidelines and saw it evolve. Eventually, he became part of the IPL Governing Council and was head of the National Cricket Academy for three years. In all those years, he was able to see the bigger picture. With that role, he was able to pick coaches and conduct performance reviews.

In 2017, Ravi Shastri started a new career as a national coach taking the helm of Team India. Observers noted that Shastri would only become a “yes man” as the BCCI sets the exact boundaries of a captain/coach relationship. But Shastri wasn’t a “yes man” like many others thought he would become. He had extensive international cricket experience and was knowledgeable about the ins and outs of the sport.

Ravi Shastri was always willing to give a helping hand like he did at the start of the test series against Australia. He was often criticized, but Shastri did not care as long as he got the job done. At the onset, he already knew what his role was to make sure that his players were prepared mentally and had nothing else on their minds. His desire was to make the team play a brand of cricket which India has never played over the last three years—positive and fearless.

Soon, Sashtri became the best cricket coach Team India ever had. He steered the team to back-to-back series wins in Australia, which the team has not done in 32 years and he did it without his top players. He proved his doubters wrong and now many are asking who can beat what Sashtri has done for the team.

His stint as Team India’s coach ended last July 2021 and Shastri is contemplating a return to the commentating scene. However, his connection with an IPL team may keep him from earning a direct commentary role because of conflict of interest rules. Shastri himself confirmed that he is getting some offers from top broadcasters in the world and from Indian sports channels as well. Some teams have also approached him for a coaching job for the upcoming IPL season.

As a coach, Ravi Shastri has left a legacy as one of the best Indian cricket has ever had. His back-to-back series wins against Australia is something that has never been achieved before in the last 32 years. He also has a series win against England tucked under his belt.

In 2019, Shastri was appointed as coach of the Indian senior men’s cricket team. He is currently the head coach of India for the 2021 ICC T20 World Cup. Whatever he decides to do, the one who will replace him will have big shoes to fill due to the legacy Shastri has left behind.

What according to you is the bigger value?

What do you think? In which role does Ravi Shastri offer more value? As a coach or a commentator? Please share your views in the comments section, or write us at our Twitter and Instagram handle. Do share our page with interested fantasy cricket enthusiasts. You can also write directly to me at Andy Desai.