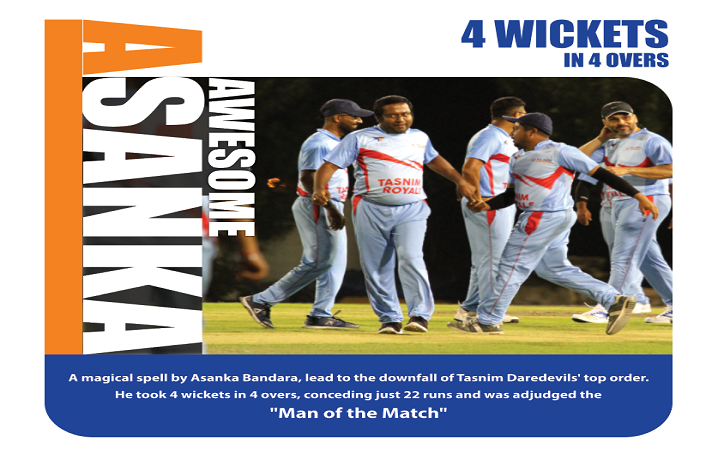 One cold evening in October 2018, a 90 Kg man – a passionate cricket fan – with a fat wobbly tummy with a white ball was standing in front of the former Oman national cricket captain. “Are you looking for a bowler” was his question with wondered eyes. That was the day I bowled with the seasoned ball after 15 years, in the practice nets at Al-Amerat cricket ground.

As a left-arm chinaman, I had a chance to make an impression in my captain’s mind. Ajay Lalcheta is a former Oman national team captain. Since he is a left-arm spinner, he could understand me well. He gave me a chance to be a part of his team in the Al-Tasnim League organized by Al-Tasnim Enterprises. This is a story of Asanka Bandara – my passionate cricket friend from Oman – in his own words.

Here is a link to his blog: Banda’s thoughts, written in Sinhalese. But, cricket doesn’t bind us to languages, isn’t it?

That was a tough period. I never played the T20 format in my career before. In Sri Lanka, I used to play 50 overs matches but that was 15 years ago. In order to be fit again, I exercised as hard as I can. I regulated my diet, but I couldn’t reduce my weight more than 3 kg. Some people laughed at me while I was bowling.  It was like: my stomach would travel in front of me, every time I bowled. But that never stopped me bowling till the end of the net sessions, every time. Finally, I was selected to the Tasnim Royal’s playing 11 for the first match of the TCL 2018.

All about Cricket fans: Fan’s Corner at Cricket Bloggers

That was an amazing feeling under floodlights, in the cricket ground. Even though I was in nearing 40s, I felt like a school cricketer. Though I had an experience of playing under the floodlights in a softball tournament, this was a completely different game.

Running through the First Game

To start with, we were invited to bat first after losing the toss. We got 199 runs on board. Ajay and Banty played brilliant knocks. With a huge total posted on the scoreboard, we had full freedom to bowl in the second session. Ajay asked me to bowl the fourth over; with instructions of keeping a very tide one without extras. I still remember his wise words like it happened yesterday: “Don’t try to do too many things, bowl wicket to wicket”.

Match brought a remarkable result for us: the Tasnim Royals. I completed my quota of 4 overs with 4 /22 and adjudicated as a “Man of the Match”.

That was an unbelievable come back after 15 years…….So don’t give up. Try hard, fight hard. If you want to do it, no one can stop you from doing it.

2 thoughts on “Cricket after 15 Years: A passion of Cricket fan”